Which areas are getting built on?

Most of the new land take takes place on land formerly used for agriculture (77 %). To a lesser extent, forest and copse areas are converted into settlement and transport areas (19 %). 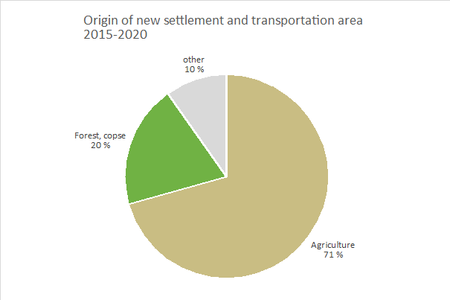 What types of settlement and transport space (SuV) are being created?

Within land-take areas, residential and mixed-use areas predominate with 42 %, followed by industrial and commercial areas and areas of special functional character with a combined 29 %. Transportation areas contribute 16 % and settlement open spaces 13 %. 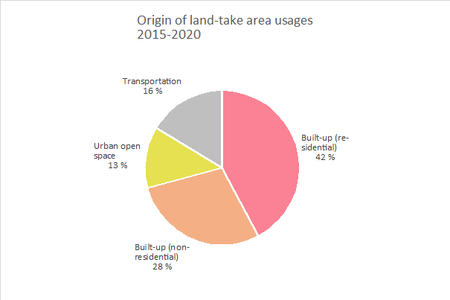 Calculation methodology for these results

By directly comparing the input data used in the IÖR-Monitor from different points in time (processed ATKIS-Basis-DLM), the change in land use can be analysed categorically and locally. It is thus possible to quantify which types of use are primarily taken up for the new designation of settlement and transport areas.

The procedure is based on a geometric intersection, taking into account certain tolerance ranges at the object edges. In this way, misclassifications due to vertex point shifts, which can occur, for example, due to minor position corrections during data updating ( sliver polygons), can be prevented.
The land-take indicators are based on this procedure and allow the conversion of land to be balanced.